There are a lot of facts in this world. That statement is itself a fact. I’ve conceived a list of six facts that may or may not be profoundly…uh, profound for you, you and even you there with the glasses.

These facts will be presented to you in the same order in which I recorded them. That is to say that the order that the facts are presented in means nothing!

In fact (settle down, this is only a fact relating to what I’m saying now – the list is coming), do your best to imagine that all the facts are first; like this: “fact #1 – yada yada yada yada. That was a good one, now I’ll read fact #1 – blah blah blah blah blah. That one was stupid, maybe fact #1 will be better. And so on.

Have you ever stopped to wonder why lists always go to 10? It’s ok, I haven’t either. Fact is, I could only come up with six. Furthermore, this article  asserts that there were six days in a week until Augustus Caesar’s nephew, Devon “Seven Digits” Caesar – he was born with seven fingers on his left hand, nagged his uncle into adding a day to make the week seven days long so his pinky wouldn’t feel left out when he counted the days of the week on his fingers  (err, he counted in English, and spoke in Latin).

Moving on, here is the list, starting with #1 and ending with #1 with four #1s in between –

#1(1) I recently noticed that my dog sneezes a lot. I thought maybe she was sick, but then it occurred to me she sniffs EVERYTHING. It is, therefore, a logical outcome that she sneeze a lot.

#1(2) I was at the gym the other day and I decided that I’m normal, everyone else is superhuman. I guess I was thinking that I’ve been like this for so long that I’m normal now. Then I saw a dude doing lunges across the gym floor with a 50lb barbell across his shoulders and thought holy cow! That guy is superhuman!

#1(3) Listen – I’m right handed. The fact that my left side was more affected than my right is, in my mind, divine intervention. I think about this often, but can’t think of anything else to add. I suppose that I’m saying it could certainly be worse.

#1(4) I went to Egypt at some point apparently and found the pyramids and the Sphinx to be eh. I found the Ginormous boxes of cereal to be far more awe inspiring. Here’s a pic that captures my consternation regarding the large cereal box –

#1(5) Let’s say you order something from an online vendor (any vendor will do, but for purposes of this fact we’ll say Amazon (coincidentally, this entry it’s brought to you buy 🙂 Amazon.com -“Buy more sh*t, dammit!)) Further, let’s say the item you ordered came in a box. To keep the contents of the box in the box, the vendor used a sticky plastic strip (for purposes of this discussion, let’s call it “tape”). I’ve provided an example picture below. Here’s the problem, you have this shiny new box expertly sealed with tape and you’re too lazy to fetch a knife. What to do?

You look all around the place, hoping that a pocket knife will shoot out of the ground. After a few minutes you decide to take action and can only locate a…

Then you do the rational calculus, would it be easier to find a knife or try this comb? You’re rational side screams out GET A F*CKING KNIFE! Uncharacteristically, you’re lazy side makes a stupendous effort to stifle this command – you don’t hear anything, so you proceed with the comb as pictured.

Now the box is open and you’re lookin pretty good.

#1(6) You can’t see it in the picture, but this bag is steaming hot. I love sushi with wasabi, I tolerate spicy stuff pretty well. I thought it probably only TASTES like wasabi, but doesn’t have the fiery essence.

I upended the bag into my mouth, filling my mouth with a generous portion. What I felt next is best described by flaming golf balls being forced out of my nose. Here’s a visual – 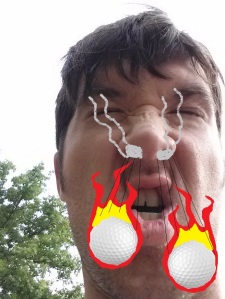