“You’re one of the good ones…[insert name]”

Very broadly, there are three types of people – 1. People who suck, 2. People who don’t suck, and 3. The good ones.

The first two are pretty self explanatory – people who don’t rack the 270lbs they just squatted from the Smith machine (seriously you guys, that’s three 45lb plates on each side) are the suckiest of what I will call the “undistinguished suckfaces” – those who suck, but not at a professional, Kathy Griffin level. So that I don’t digress on the sub-hierarchy of suck, I’ll just say that the “undistinguished suckfaces” are but a drop in the bucket of suck (or “sucket” if you will). The middle genus in my criminally simplistic taxonomy of human temperament are those who don’t suck.

The beauty of this type of class of person is that you don’t have to do much to get in, just NOT suck. I’ll put it to you like this, dear readers-

Roughly 3.14 kajillion times a day, we are faced with some choice. It could be as simple as choosing breakfast – Cheerios or leftover Chinese? Or as complex as pressing a button to test a missile, thereby risking the lives of millions of people (if you’re Kim Jong-Un).

In simplest terms, each example contains two or more broad paths. Each path is quite broad with a dizzying circuitry of tributaries and “roads less traveled”. Each path, no matter how broad or narrow, trodden or smooth will do one of two things – 1. Suck , or 2.Not suck. When you reach the threshold of these paths, ask yourself one simple question, will the result of my decision to take this path cause suck for me or anyone else? If the answer is no, go forth onto that path that you won’t suck.

If the answer is yes, ask yourself a follow-up question– will the suck of my decision outweigh the potential positives? If the answer is no, go forth onto that path that you won’t suck.

Actually, at that point, it’s best just to forget about your ends and NOT make that decision.

This leads me to the upper echelon of the quality ‘o people structure.

I’ve adopted the term “one of the good ones” to describe these people.  Such people go beyond the requirements of NOT sucking and make things less sucky for others. In short, they suck the sucking out of things that suck. They redeem the ever growing population of the “sucket”.

I’d like to tell you, Internet, about one of the good ones as I rank her. Her name is Kay, this is her likeness as of Christmas 2016 (I think).

I met Kay when she commissioned me to convert some home video tapes (Hi8, I believe) to DVD.

Turns out, Kay and her husband, Dan, are pretty neat, what with their family of ducks, old jukeboxes and antique Japanese gambling machines. To honor her uniqueness, I’m officially declaring her “one of the good ones”, and, like I did with Dr. Shearer HERE, I’m going to conjure an origin story. That is, the story you are about to read is entirely fictitious and any similarity to actual people, places or mystical ducks is purely coincidental (and frickin awesome!). Here we go –

Keeping watch over the islands of Norway.

That between the spires is a connection

Where mystical creatures live and play.

It happened upon a day

There arose a great upset

When village was met

By a bundle so fey.

In the mild month of May,

The people of Austvågøya did find

A basket seemingly left behind

Floating in the bay.

A baby they found within;

How could it have been

That a baby should come this way?

The village elders did carefully assay

The coming of this child

As if from the wild;

But none could say…

Until Sigurd stood forth,

Pointed to the north

And opened his mouth to say…

… “I know from whither this child did stray,

By some folly she was let…

…Out the doorway atop Fløyfjellet

From thither did she come this way.”

This he did convey

To the villagers there assembled.

Oh how they stirred and trembled

At the thought of a mystical doorway.

With intent to allay,

“On the morrow I shall take…

…this child back that way.”

The people thought him fey,

But in his words they found relief

In the face of the belief

A ransom for the child they’d have to pay.

And so the next day,

On a journey to the north

… any cost for this child gone astray

And so he climbed high, then higher

To reach the twin spire;

The frame of the dimensional doorway

Facing the columns he did say,

An enchantment to lay bare,

Any charm hidden there

And thus show him the way.

At that moment darkness overtook day

A glowing portal did appear.

So Sigurd buried his fear

Set on returning the little girl, come what may.

So, valiantly he passed through the array;

He spun and wrenched and twisted non-stop.

He peered hither and thither to assay

A scene before him so queer,

Sound but a hollow din, sight but a chromatic smear.

… then opened his mouth to say,

“Behold, I bare a child of your domain,

And I would parley to ease any disdain,

And enmity towards my village by the bay”

At that, Sigurd’s eyes met with a curious display;

The sounds of his voice were as ripples on a pond,

Wrinkling and warping the air beyond.

In reply, a surly voice squawked “who are they?” 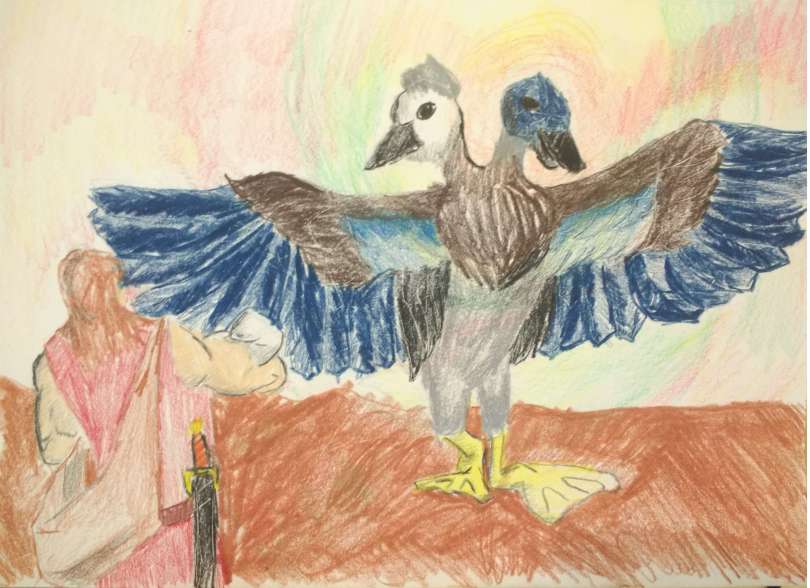 The words seemed an aural melee

Attacking sight and sound with such force,

He spied an abomination heading his way.

Of all the oddities Sigurd saw that day,

None were so queer as this.

The creature on its way

Was a duck I tell you,

Not with one head, but with two!

The two heads conversed in a manner so fey…

… gouging and pecking away

At the neighboring head

While squawking so loudly as to raise the dead;

Ere the squawking and pecking would belay

“I’ve wandered far, and am weary.

What of this child, a ward gone astray?”

The right head pecked and squawked with derision,

It squawked what was surely a mainstay…

… of the conversation most every day

For it was, the loud squawking and jeering

Resulted in loss of hearing;

Making any message difficult to convey.

Sigurd feared there would be no end to the fray,

That his quest had been for nought;

That this child, the realm had already forgot.

He resolved to leave without delay.

As before, sounds he made

Were given shape, and in physical form, did pervade

And ripple the air like water in a bay.

Upon reaching the creature, the head of gray

Squawking “We feel a queer sensation!”

In a manner so fey.

With the occasional raucous “quack”;

Considering the creature, Sigurd turned back…

…as he thought Why’d I come this way?

Then something happened, he decided to stay,

Just as if he had voiced that question

“I have a suggestion”

Quacked the head of grey.

It came to Sigurd

That this beastly bird

He should here and now slay.

Through some diabolical relay,

They heard the thoughts in Sigurd’s head;

That he would see them dead

Ere they’d had their say.

For then they did display,

A visage of death

And razor sharp talons to flay.

Deliver me from this beast I pray

Thought he in desperation

“Leave the child for obliteration?”

“Creature, how is it that you can say

Answers to questions in my head

And to thoughts I haven’t said?

Tell me true, and do not play.”

“You know nought of your location,

We know much of your vocation”

Spoke the duck with the head so grey.

At this, Sigurd did display…

…a countenance of dither

That he should come hither

And be subject to such play.

Sigurd, with his mind clear,

Queried, “what know you of my vocation here?

This answer, to Sigurd, they did purvey –

“You seek the repatriation,

Of the youth in your possession.”

They know of the child found by the bay…

Follow My Brain Injourney on WordPress.com
Join 728 other followers